Jenny holds her daughter tight inside the crowded makeshift evacuation center, both of them just two wet faces amidst a sea of relocated people due to Typhoon Maring. Her gaze is blank; her mind is lost between thinking about their small house flooded through and through, the streets of their barangay which are teeming with badly paved roads, their yet-to-be-paid-in-full TV set where she watches Ang Dating Daan on and her daughter, sleeping quietly while running a fever.

The television camera pans over her for half a second while she holds that gaze.

It is that gaze that a 23-year-old absently saw on the muted television set in one prominent hotel’s hip bar in the heart of the Metro. From a higher area of the country, where the typhoon’s strong presence can’t be felt, the seemingly rich young lady ordered a round of drinks for her friends with a wave of her bejeweled hands.  She swipes one of her many debit cards, which is one too many for a 23-year-old to have, fueled by money a 23-year-old could never have unless she’s Richie Rich’s sister.

But even Richie Rich’s hypothetical sister would probably have enough sense not to waste the fortune that her parents worked hard for. But then again, when your parents didn’t acquire the fortune you buy flashy stuff with fairly, who’s going to keep count, right?

Why, the Filipino people, of course.

The above story may or may not be fictional but at the same time, to some, it may feel absolutely real.

Even with displacing thousands of Filipinos, causing high-level floods, disrupting schools and businesses, the anguish Typhoon Maring brings won’t be able to compare with the level of anguish some unbelievable scandals have brought to the Filipino consciousness.

A Scandal’s Theme: I Can Name The Truth in Four Notes

It’s not really hard to pinpoint what a scandal is. Especially when there’s a theme.

First up, we have the lady of the dismal hour, Ms. Janet Lim-Napoles.

Janet Lim-Napoles. Not even Typhoon Maring can drown her 10-B pork barrel scandal. File photo from rappler.com

Philippine authorities are currently hunting down businesswoman Napoles, allegedly the woman behind the 10-billion Pork Barrel scam.  All that money was supposed to have gone towards the Priority Development Assistance Fund (PDAF), which could have gone to projects that would benefit taxpayers – like better flood-resistant roads for low-lying areas, benefiting both the poor and the rich alike.

But all that money that the Filipino people worked hard for seemed to have gone to personal bank accounts, her younger daughter’s spending sprees, real estates, and more.

If that wasn’t enough, word around town is that she funneled the funds to fraudulent non-governmental organizations, which was supposedly built under the guise of giving aid to the people. Ironically, instead, she stole from them.

Now, Napoloes is in hiding. But rumor has it that she will be hard to catch since allegedly, her politician friends who helped her with her grand scheme, got her back.

So to sum it up: an evil scheme, ruthless self-spending, an ironic twist and powerful connections.

Which brings to mind a lesser-known scandal of equally appalling misuse of funds. A few years back, a man named Daniel Veridiano did the exact same thing Napoles is now famous for – using money that wasn’t his in gut-wrenchingly opulent proportions.

Daniel “Puto” Veridiano. File photo from an article penned by Jane Abao entitled “Portrait of the ‘raped man’ for whom the Interpol would mobilize”

Not so long ago, one Daniel “Puto” Veridiano used one credit card of the Members Church of God International (MCGI) for his personal gain. By using a credit card that was supposed to have been used for purchasing broadcast equipment for the Church’s propagation efforts, Veridiano used millions of pesos to pamper himself with expensive things.

If stealing money wasn’t enough, Veridiano decided to file a false rape case against MCGI Presiding Minister Bro. Eliseo Soriano to get on a rival religious organization’s good side.  Ironically, he was the one who admitted to raping 14 young men who were his subordinates at the time when he was still a member of the Church. Here’s a video of Veridiano admitting to his misdeeds.

Now Veridiano is hiding in the wealthy bosom of his influential religious friends, as he betrayed MCGI for continued financial support from the company of those whom he said would be “like a quick jump to hell” if he ever joined.

After betraying Bro. Eli Soriano, the very man who helped him when he was ill, Veridiano became a member of the Iglesia ni Cristo for financial prosperity. Screen capture from Youtube video.

Like the rest of the thinking population of the Philippines, I can’t help but sense a theme here.

The Truth Comes Out of the Shopping Bag: What Scandal-Laden Money Can Buy

Money can buy lots of things.

For the Napoles clan, millions of dollars was spent on posh properties outside the Philippines. And that’s just the tip of the spending iceberg.

The family also owned several luxury cars that she and her family cruise the many beautiful places of the Philippines with. 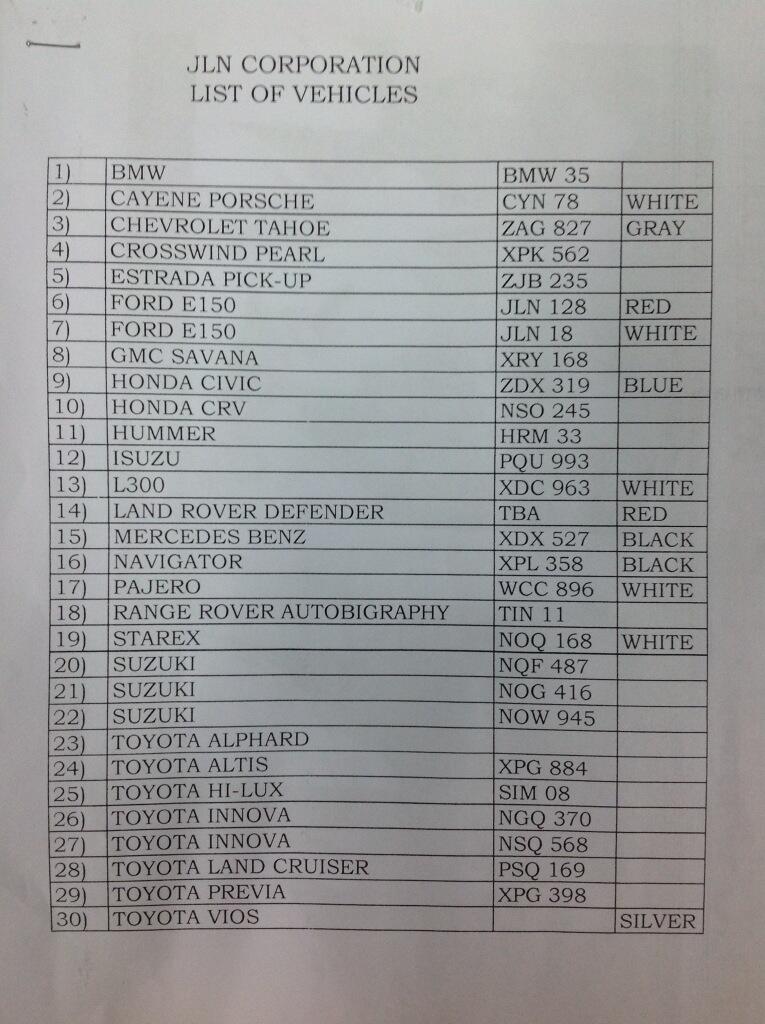 This famous list of cars, now retweeted and emailed by Filipinos for dissemination purposes, has a funny twin in satire form, originally posted on this blog:

Making light out of a very absurd situation: a list of the many absurd things one could probably get away with with the people’s money. Screen capture from “So, What’s News?” blog.

While the list contains things that might make you break into a chuckle, the social networking site of one of Napoles’ children can make you channel your inner 8-year-old and break into a tantrum.

Jeanne Napoles, daughter of Janet Naploes, lived a very lavish lifestyle and “flaunted” it for people to see.

On her Tumblr page, she posted photographs exhibiting the dilemma only a few young ladies face in today’s hard economic times:  Just what should a girl wear to the Grammy’s?

She probably wore these to the Grammy’s. Christian Louboutin shoes. Screen capture from: http://jeanenapoles.tumblr.com/page/5

The public’s sneak peak: Finally, after days of deep thought and introspection, her Grammy’s get-up. Screen capture from: http://jeanenapoles.tumblr.com/page/4

This is on top of course of her numerous trips to various countries like Japan and London. You can see more of her photos here.

It’s not so much as her blogging about her life and what she owns and what she wore that’s the problem — every other teenager in the world who lives in the Me Millennium does this too. What’s extremely bothersome is that the young lady is reportedly unemployed, and that the money that funded all her lavish activities and belongings weren’t hers or her family’s. Her parents only made  Php 577,807.47 for 2011-2012.

Hence, that money is the Filipino people’s.

In the same light,  Daniel Veridiano, who doesn’t own any businesses or doesn’t belong to income-generating families had the bad habit of showering himself with expensive gifts.

In an expose article written by Jane Abao entitled “Portrait of the ‘raped man’ for whom the Interpol would mobilize,” she writes about how Daniel “Puto” used an extension credit card to support his opulent and highly unnecessary vices:

This is of course, aside from the many cash advances, posh clothes, town-to-town hops, pricey dermatology appointments, numerous gadgets and devices..

Veridiano on focus. One of Veridiano’s shopping sprees caught on camera. Screen captures taken from: http://www.youtube.com/watch?v=ZE2DFrRsuOc

And of course, to top it all off, a penis enlarger.

All of these, he spent lavishly on himself. And who paid for what amounted to  millions of pesos worth of self-serving damage? The very man who helped him get through his illness — Bro. Eliseo Soriano, or Bro. Eli for short.

Daniel “Puto” Veridiano talks about Bro. Eli Soriano, the man who took him in and helped him get through a serious illness. He would later accuse him of rape. Screen capture from: http://www.youtube.com/watch?v=a9zc0lf52Ms

And so what do we, the Filipino people, get from these cases of gross opulence on account of innocent people’s money?

We get to see very clear pictures of injustice.  If we think about it, these self-centered events have very cogent linkages to the very basic of what the rest of the populace should enjoy: the money they’ve squandered should’ve gone towards projects of goodwill and community betterment.

We as a country are used to being struck by numerous back-to-back typhoons. And we are proud to say that the Filipino nation is a country of fortitude and resilience: our streets may be flooded, but our hearts and spirits remain high and dry.

These heinous acts of opulence form just a small part of the corruption that strike the country from the highest levels of power, worse than any natural disaster we can ever encounter, weathering our country to the core. And it’s up to us if we let such ostentatious displays of opulence, greed and corruption happen again, and again, and again.

Or we can stand up, object, and do something about it. Let these folks and everyone in the world know, that this show of opulence on our expense is definitely not OK.

Show them that we truly are a resilient people. We do not just spring back at corruption, greed, and injustice.

We strike back by arming ourselves with the truth and holding on to it like it was all we have in life — holding it as tight as we would our only daughter, who has a fever in the midst of a typhoon.