New York is famous for its yellow taxicabs running circles in Manhattan. All 13,237 of them are ready to bring Yankees and tourists to their destinations, except of course when it’s raining, when it’s almost next to impossible to hail a taxi. Now, what I, as a glorified commuter in this great state, wish would be impossible is to be a witness (or be part of) a road accident in the beautiful streets of the Empire State. So imagine if the estimated 42,000 New York City cab drivers took part in a program like UNTV’s Tulong Muna Bago Pasada, another revolutionary public service effort from the Philippines’ prime Public Service network – UNTV 37, we would have lesser road accidents. We would have thousands of real-life superheroes. We would have more people on the side of good and justice and all things great and in vivid Technicolor.

Now wouldn’t New York be a safer place to live in if this happened?

UNTV’s Tulong Muna Bago Pasada is a mouthful for those who aren’t Filipinos, and that’s fine and understandable. But what it translates to, in essence, is “Help First, Tansport Later.” Basically, this puts a greater deal of importance on human life than a cab fare. By learning to become more disciplined drivers and become certified first aid rescuers to give aid to those who need it in emergency situations, cab drivers are now the extension of our healthcare practitioners on the streets — where the action happens.

This public service endeavor has recently started in the Philippines, spearheaded by Kuya (That’s the Filipino term for “big brother”) Daniel Razon.  Tulong Muna Bago Pasada aims to educate cab drivers with first aid and BLS techniques. They are also trained based on real-life scenarios – they learn what to do first and who to call in case they witness a hit-and-run, a head-on collision, and other street emergencies requiring fast thinking and helping.  After they become well equipped with enough life-saving knowledge, they become certified. The intensive training that lasts for several days, like most of what UNTV’s projects, is absolutely free of charge for Filipino cab drivers.

Kuya Daniel Razon has concocted this one-of-a-kind public service project with the goal of hitting two public service goals with one unique project: making the streets safer for motorists, commuters, and pedestrians and increasing the number of Filipino public servants. The Tulong Muna Bago Pasada is an off-shoot to the Tulong Muna Bago Balita project of UNTV – which is the first of its kind in Philippine media, where reporters, cameramen, and drivers put helping first, before reporting; they are on-field rescuers primarily, valuing the lives of others than news reporting, and consequently, high ratings. Pure, unadulterated public service. 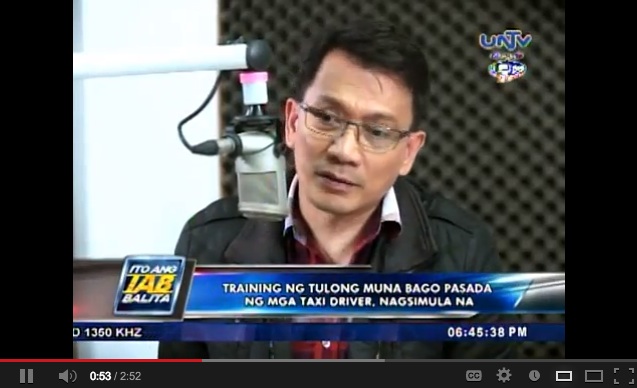 Bringing this project in New York would be amazing and ideal. Not only will there be more public servants driving around the city, but since taxicabs are usually around at any given hour all year round, there will be trained cab drivers will be roaming the streets, ready to pull over and help out anyone in need. There will be a rebranding if you will, of our cab drivers’ reputation. They will become street superheroes.

Wouldn’t end-of-the-world movies find another place to sink rather than poor old Lady Liberty by Ellis Island? Instead of superheroes wreaking (unintentional, I guess) havoc in Manhattan, real ones would be driving all around it. Instead of a large lizard stomping all over the city, cab drivers will be actively on the look out for people in distress that they can help.  Once Tulong Muna Bago Pasada pushes through, I can’t guarantee that it will be easier to hail a taxicab, but hey, you’ll feel safer that the cab driver bringing you to your friend’s place can help you or other motorists in times of emergencies. So sit back, relax, and tip your cabbie well.