While democrats and republicans are still battling it out on the famous Obamacare, debating whether if it’s a good idea or otherwise, a man with a big heart somewhere in the small yet beautiful islands of the Philippines is busy bringing his own brand of healthcare reform in his homeland.

And for the thousands of Filipinos who will benefit from this landmark public service endeavor, this is more than just a good idea. It’s a great, lifesaving idea that has never before been attempted in the whole nation.

The man behind this is Daniel Razon, broadcast journalist and CEO of Breakthroughs and Milestones Productions, Inc and UNTV and he is bringing free healthcare to Filipinos who need it most – in all parts of the country. This is part of what was announced on the 9th anniversary of UNTV 37 on July 18, 2013.

Sit back, stop arguing, and watch how it’s done, America:

Free Healthcare In Manila and Nearby Regions..

The UNTV 37 station in Edsa, Quezon City, Philippines is the only station in the Philippines with a built-in clinic. This is where people get free medical services from Mondays through Fridays, as seen on the network’s morning show Good Morning, Kuya!:

Aside from this, another free clinic is situated in the Ang Dating Daan Convention Center in Apalit, Pampanga, ready to aid those in the area for free. UNTV ambulances are on standby 24/7 for emergency situations, ready to transport and give first aid to those in need without asking for a single penny.

…And to the rest of the Philippine Islands Kuya Daniel Razon, dubbed as Mr. Public Service, as he tells everyone of the new health services UNTV is offering for all Filipino indigents across the country.

If that weren’t enough, UNTV is also giving away UNTV-sponsored PhilHealth insurance cards in all parts of the country for Filipino indigents. Those who will be eligible for these medical freebies will be determined in cooperation with the Department of Social Welfare and Development (DSWD) and local government units.

These are of course, in addition to the regular medical missions carried out by the network – which brings a team of medical professionals along with medical equipment and medicines to far-flung barrios and villages. As promised by Mr. Public Service Kuya Daniel, the medical missions in partnership with the Members Church of God International, will be more extensive this year. 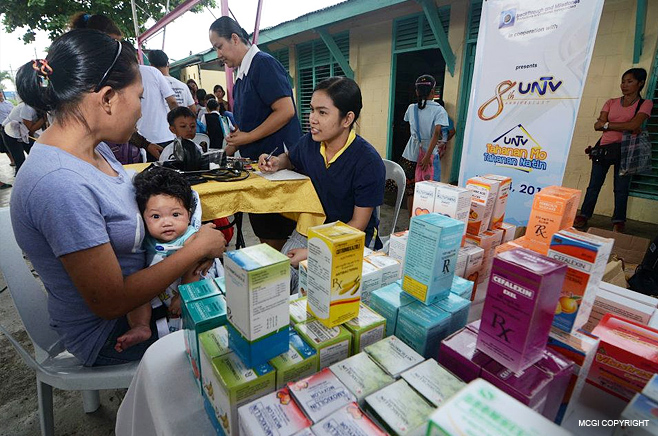 In partnership with MCGI, UNTV holds medical missions in provinces of the Philippines. Photo courtesy of MCGI.org

This just blows me away. Not only are these healthcare programs ingenious, but also, a budding network is behind them.

These health reform ideals are proof that the relatively small can create ginormous ideas for the good of all.

Living away from my country of origin, it makes me all the more proud to see how progressive Filipinos are in thinking of ways to help improve the plight of others.  UNTV 37 is one big, lifesaving reason why it’s more beneficial in the Philippines. And ultimately, just more fun.